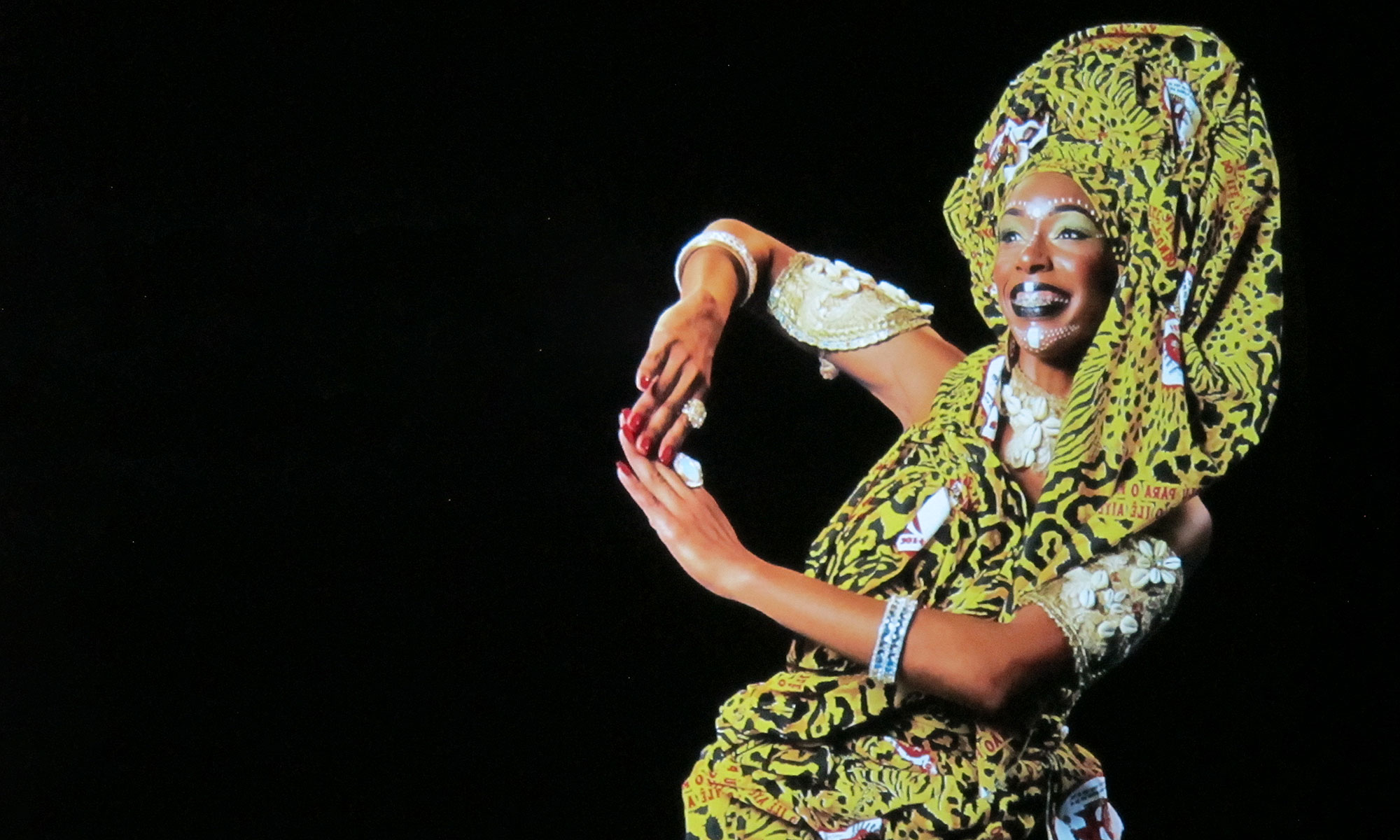 The afoxés and blocos afros of Salvador are closely linked aesthetically, variations upon an African theme, the afoxés as a matter of ancestry and culture, the blocos afros — initially anyway and in the case of Ilê Aiyê certainly still — as an expression of black empowerment inspired in part by the civil rights movement in the United States.

Afoxé (ah-faw-SHEH) is basically candomblé with the religion taken out…the use of candomblé rhythms and “songs” and dance in social, non-religious settings like Carnival. The principal rhythm associated with afoxé is ijexá (ee-zheh-SHAH), a more subtle and complicated version of what you might hear pounded out on the Maxwell House coffee can for a late-hours Manhattan cocktail party conga line. On terreiros de candomblé ijexá is associated principally with Oxalá (the father) and Oxum (goddess of sweet waters), among other orixás.

Embaixada Africana (African Embassy) was the first afoxé, parading in the Carnival of 1895. The next year afoxé Pândego da África (African Hijinks) went out, and in 1905 an afoxé climbed the Ladeira da Barroquinha to parade up the Ladeira de São Bento, thereby breaking a tacit understanding that the Carnival groups from the lower (and darker) economic classes had their areas (Baixa dos Sapateiros, Barroquinha, Pelourinho) and the upper classes had theirs (Avenida Sete de Setembro, Piedade). Salvador’s largest and most widely known afoxé — Filhos de Gandhy — was formed in 1949 by stevedores whose inspiration was the film Gunga Din and whose inspiration for the name was the great Indian leader and pacifist (who had been assassinated the year before). Other afoxés include or have included Filhos de Korin Efan, Badauê, and Filhas de Oxum. From 1904 until 1918 afoxés were forbidden to march during Carnival, ostensibly to combat “crime, ao deboche, e à desordem” (crime, debauchery, and disorder)”.

Blocos Afros are Carnival blocos (groups) which, put simply, celebrate cultural manifestations of African origin. The rhythms are usually based in what is called “samba afro” or “samba reggae” (which come in a number of variations) and the dress is African-inspired (in contrast to afoxé Filhos de Gandhy, whose robes draw their inspiration from the Indian subcontinent). Other blocos afros include Muzenza (from Liberdade), and Malê de Balê (of Itapoan), who drew the inspiration for their name from the Malê Revolt.

These groups — the afoxés and blocos afros — are by far the most beautiful and moving manifestations of Carnival in Salvador. The dances of candomblé, the intricate and powerful rhythms, the vestments…pure and powerful splendor! Most of the afoxés are relegated to the tiny Batatinha Carnival circuit, or the Terreiro de Jesus.

With respect to the name “Olodum”, the best known of Salvador’s blocos afros (both Michael Jackson and Paul Simon have recorded with them), I’ve heard respectful stories in several variations but with the common theme of reaching deep into tradition and pietous religiosity for inspiration…

Principal founder Geraldo Miranda (popularly called Geraldão — Big Gerald), who went on to found Muzenza after an internal breach, tells it like this, however (my translation):

“As for the name of the bloco, Olodum, I was the one who came up with it, thanks to a friend, a filha-de-santo (candomblé adept), who happened to mention that Olo and Dum were two gods, without mentioning anything about their origins or if there was really any religious basis for this. I stuck the two names together and nobody disagreed and so it was, Olodum.”

Geraldão was correct in his unvoiced but implied suspicion that there wasn’t any true religious basis for this, although it wasn’t completely off the mark.

Through the window below enter into the matrix proper…