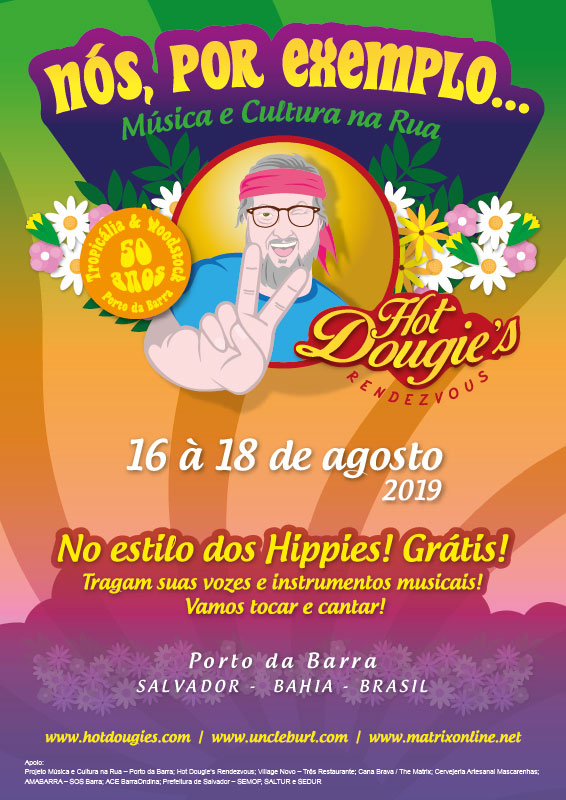 What: A celebration in Porto da Barra

What is this celebration called?: “Nós, por Exemplo…” (Revistado!) / “Us, for Example…” (Revisited!)

Why: On those days 50 years ago – 1969 – the Woodstock music festival – almost half a million people – took place in a farm field outside of Woodstock, New York in the United States. The festival was based in a youth counterculture united against America’s war in Vietnam.

At the same time Brazil saw the exile of Caetano Veloso and Gilberto Gil, whose music – Tropicália – was based in Brazil’s own countercultural revolution seeking a fair, free and just society, democracy and peace. The focal point of this movement’s origin some years earlier was the beach at Porto da Barra.

Woodstock’s golden anniversary is being celebrated in the USA and is expected to feature Carlos Santana and Ringo Starr, among others.

The anniversaries of both Woodstock AND Tropicália are being celebrated in Tropicália’s birthplace, Porto da Barra on August 16th, 17th and 18th, 2019.

“Nos, por example…” continues the tradition of free music and culture in the street which began in 2014 following the renovation of Porto da Barra by the Prefeitura of Salvador.

*Doug Adair created the character of “Uncle Burl” – complete with a live music show reinforcing “Good Neighbor” themes – because of a personal commitment he made many years ago to the legendary Academy Award-winning actor and singer Burl Ives (1909-1995).

Way back in 1976, Burl asked Doug, a young man at the time, to help ensure Burl would not be forgotten after he was gone, by – in the future – when Doug had some years on him – creating and performing in a show about Burl’s life and legacy.

Burl was scheduled to visit Brazil in 1986 with the Kennedy Center sponsored “Imagination Celebration” but by then he was too old and frail to make the trip.

Uncle Burl’s “Imagination Celebration” belatedly fulfills Burl’s desire to visit Brazil and showcase the importance of arts and cultural education, and the vast importance of being a “Good Neighbor”.

Some highly talented performers, along with Uncle Burl, will be performing in Porto da Barra, in the manner of the original Tropicália “performances” (keeping in mind that in the old Porto da Barra days this was simply a group of unknown but highly talented young people without a specific name for what they were doing)…with music ranging from Caetano’s Sol Negro (the great success of the original “Nós, por Exemplo…”) to Jimi Hendrix’s Purple Haze, to beyond…

All are invited in the spirit of the Age of Aquarius to Porto da Barra for this celebration of peace, love, harmony and understanding!

Attire?: Tie dye! Bandanas! Hair (if you still have any; and white is fine)! Granny glasses! Bell bottoms!

Comportment?: Aquele abraço! Live music performers in Porto da Barra are asked to follow the same practical and just, sound and behavior standards established by the people of New Orleans, Louisiana in the USA. These norms were created to allow the musical culture for which the city is famous to thrive while respecting the sensibilities and needs of nearby residences and businesses.

Why “Nós, por Exemplo”?: This was the title of the inaugural show in the Teatro Vila Velha, which included Caetano Veloso, Gilberto Gil, Maria Bethânia and Maria da Graça (Gal Costa), among others. The idea for the title was Caetano’s, who explained in his book Verdade Tropical that it meant they weren’t a model, an example, to be followed; that every generation would have its own ways of doing things, its own “us, for example”.

From the unknown geniuses who created samba in the Recôncavo to Dorival Caymmi to Caetano Veloso to now…succeeding generations in Bahia have been and are doing it their own way. But there is something important these ways have in common, and in 1969 that something ran all the way from Salvador, Bahia, Brazil to Woodstock, New York, United States of America.

P.S. We’d also like to give a shout-out to Arembepe’s past as a Brazilian refuge for Mick Jagger and Janis Joplin, among others, and its near-future as an ecological park and living museum planned and curated by Gringo Cardia, the curator behind Salvador’s marvelous Casa do Carnaval!

The Night Begins! / A Noite Começa!

Opening – Welcoming Remarks and Highlights of the Celebration

Discussion and Instruction of the symbolism of Afro-Bahian dance and culture.

Rosangela Silvestre – Dancing in the Streets!